On November 4, 2014, Nevada voters approved the creation of a Court of Appeals by allowing an amendment to Article 6 of the Nevada Constitution. This unique court hears roughly one-third of all cases submitted to the Nevada Supreme Court in a deflective model, where the Supreme Court assigns cases to the three-judge Court of Appeals. This is similar to systems used in other states, including Iowa, Idaho, and Mississippi.

Prior to this change, the Supreme Court heard all appeals, including everything from murder convictions to appeals of driver’s license revocations. Before 2014, the Supreme Court heard all appeals, including everything from murder convictions to appeals of driver’s license revocations. For decades, the Supreme Court struggled to keep up with its caseload. This was demonstrated by the number of pending cases before the court, which prevented speedy resolution of appeals. The idea for the Court of Appeals was born out of the concern that “justice delayed is justice denied.” The truth of this old adage was painfully apparent when families had to wait for an appeal in a child custody case, or when decisions on proposed ballot initiatives were slowed by the backlog of cases. With the voter-approved Court of Appeals, parties waiting for their appeals to be heard now have their cases resolved more quickly. 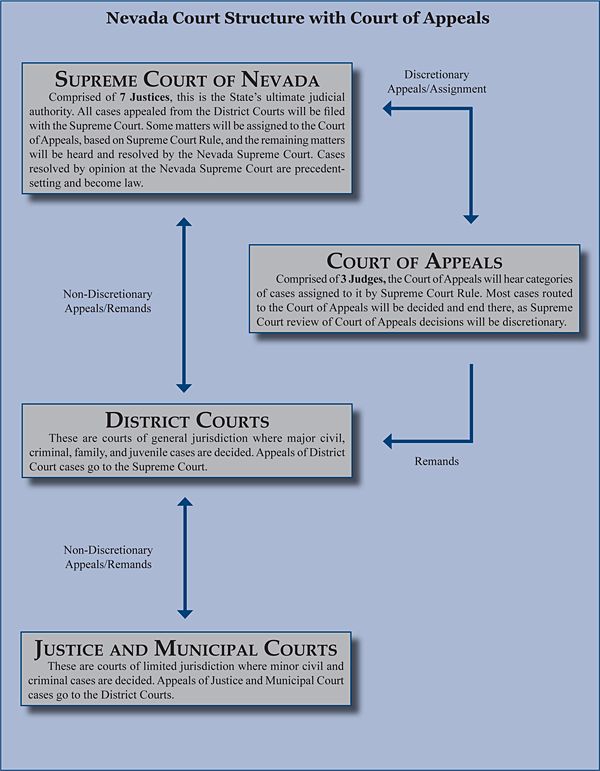 Appellate courts resolve cases by published opinion and unpublished order. Opinions become part of the State of Nevada’s case law and can be cited and relied on by lower courts, attorneys and the public. Unpublished orders apply only to the parties involved in the appeal.

The Court of Appeals hears most matters that are not precedent-setting and take less time to prepare. This allows the Nevada Supreme Court to spend more time on the cases that merit published opinions and take more time to prepare.

In sum, the Court of Appeals has improved access to justice in Nevada by providing for faster resolution of all cases. In addition, the Court of Appeals has allowed for an increase in the number of published opinions in all areas of Nevada law. These published opinions improve decisions made by the District Courts and provide clarity for Nevada’s citizens and businesses.